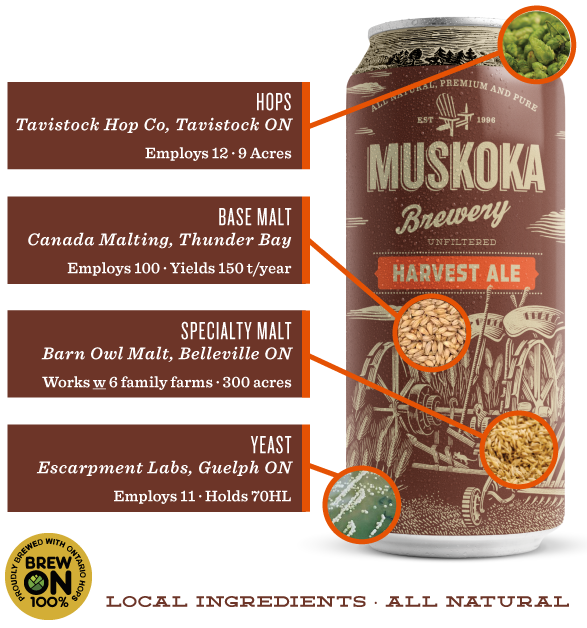 ONTARIO, August 22, 2018 – Are you a crokinole playing, lake-dipping, snow shoeing, craft-sipping canuck? Then you might just love our All-Ontario brew just as much as an otter loves a river rock. Since 2009, Harvest Ale has been a fall favourite. For a second year in a row, we’re making it with natural ingredients from our Ontario partners.

Harvest Ale is cropping up at LCBO, Beer Store, and grocery before Labour Day. Headed for NFLD, AB, SK, and NB soon after.

We’ve teamed up with Tavistock Hop Co., Barn Owl Malt, Escarpment Labs, and Canada Malting‘s Ottawa Valley farmers to bring you this year’s Harvest Ale. It’s a well-travelled brew, with ingredients that have passed through at least nine towns and cities in Ontario.

Made with 100% Ontario ingredients and BrewON Certified hops.

After a few years of cultivating and building the farm, Tavistock Hops Co. started supplying hops to brewers. At nine acres, Kyle Wynette works around the clock to get the hops ready to harvest in August.  Unsurprisingly, growing hops in Southwestern Ontario has its challenges. Their near term (5 year) growth plan is for the farm to reach maturity and maximize the yield before expanding. Tavistock engages a collection of eight to ten students to learn and work on the farm. They’re involved in the community, attending local hockey games and sponsoring a U23 fast pitch team. Tavistock hops befriends their customers, guiding them through brewing challenges and making their product accessible to smaller brewers.

Barn Owl Malt is owned and operated by Devin and Leslie Huffman. Located in Belleville, Ontario, they are in their third year of malting production. Their malts are unique in that they are 100% Ontario sourced and malted, using a traditional method called floor malting. Harvest Ale is made with two specialty malts from Barn Owl Malt. The barley in the Munich Malt was grown in Almonte, Ontario by Harshell Family Farm Enterprises. The wheat in the Red Wheat Malt was grown in Bath, Ontario by Miller Seed Farm. Barn Owl Malt operates with a focus on sustainability, using one-third the water of a conventional malt house, an on-site bio-digester to treat waste water and repurposing waste grain as animal feed (always popular). 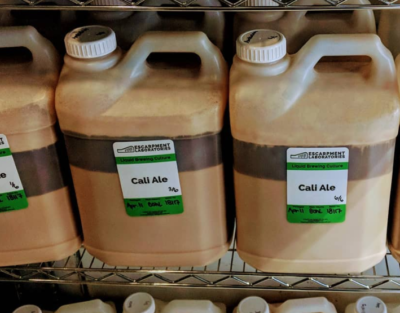 Canada’s only full service liquid yeast lab. Why liquid yeast? Most yeasts are purchased dry, through the United States. While this is a completely regular practice, liquid yeast is quicker and allows greater flexibility to enhance the flavour and complexity of your desired brew. We selected Cali-Ale yeast which is a neutral ale yeast designed to be a hearty bomb-proof yeast that lets the malt and hop flavours shine through. Not just a supplier, they’ve become a trusted yeast lab from coast to coast. Escarpment Labs aims to be a tide that lifts all boats; one that befriends and advises breweries.

For the base malt in Harvest Ale, we needed 21,600 kg. That’s a big haul. We reached out to Canada Malting to source us an Ontario-based barley for malting at their facility in Thunder Bay. Canada Malting works with over 2000 farmers across Canada every year, and employs over 50 in procurement. They found a number of local farms in Ontario including a family farm in Ottawa Valley to source the barley. Working directly with the farmers (many multi-generational) allows Canada Malting to know and support those longer-term relationships. Incorporated in 1902, Canada Malting is a long-term partner in brewing. We use and trust their product in all our brands.