02 Feb Beer and Ice Cream with a Chance of Thunder 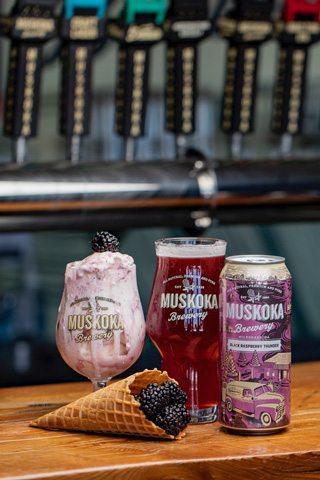 BRACEBRIDGE, February 1, 2019 – What happens when a brewery and an ice creamery get together? The perfect storm. Muskoka Brewery and Kawartha Dairy are teaming up again to introduce a second collab-beer-ation: Black Raspberry Thunder. The ice cream that inspired the brew boasts white chocolate chunks over a rich vanilla base with a magenta swirl of raspberry. What style could be more perfectly suited than a milkshake IPA?

“Last year’s collaboration with Kawartha Dairy was a resounding success,” says Muskoka Brewery President, Todd Lewin. “Stores sold out quickly, so we knew that we wanted to grow the partnership from there. A milkshake IPA seemed like the right fit, with a connection to ice cream in the name and its building popularity in craft. Our last rendition of this style, Berry Springer, won the World Beer Award for Best Specialty IPA, so we’re expecting great things from Black Raspberry Thunder.”

In cottage country, stopping for Kawartha ice cream is as traditional as cracking open a cold Muskoka brew, so it only makes sense to bring the two together by teaming up with Kawartha Dairy to create this unfiltered, full-bodied raspberry and vanilla flavoured milkshake IPA. Our team of brewers really brought the thunder (pun intended) with this one. Water, hops, oats, malted barley and yeast are combined with lactose, black raspberry, boysenberry, vanilla, and crème de cacao extract. Lactose is the essential ingredient needed to achieve milkshake IPA status, creating pleasantly sweet overtones in a traditionally bitter brew.

Black Raspberry Thunder pours a vibrant burgundy with a soft pink foam. Skip the roses, the fresh aroma of raspberries, vanilla and subtle caramel is the only bouquet you need. A rich creamy mouthfeel opens up to showcase vibrant flavours of juicy raspberry, commended by soft notes of vanilla. This full-bodied milkshake IPA finishes mildly tart, balanced by a subdued bitterness. 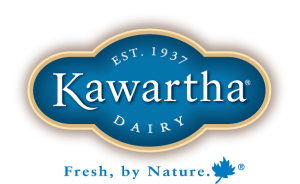 Chase the storm: Black Raspberry Thunder is available today at the brewery and online Hop Shop, heading to grocery next week, and to the LCBO in mid-February while supplies last. To celebrate, we’ll be dishing out ice cream and beer samples of Black Raspberry Thunder and its predecessor, Salty Caramel Truffle, in the taproom. Swing by this month for the chance to win some prizes when you tell us if you’re “Sweet” or “Salty”.