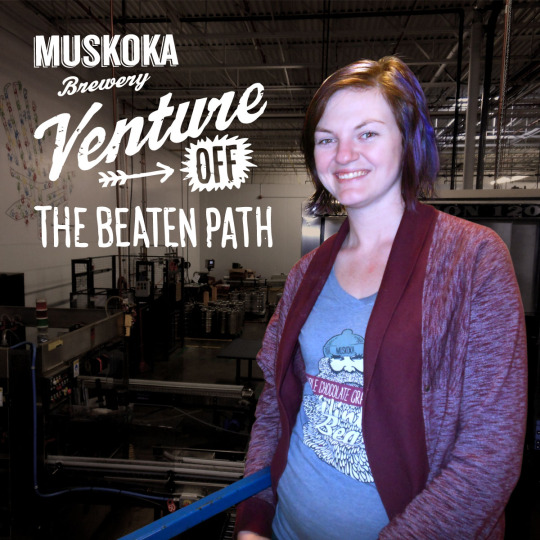 Posted at 20:34h in Uncategorized by Ryan Payne
0 Likes

Aurora started her journey at Muskoka in 2013 on the bottling line, but moved to retail in August 2015 for six months. As someone who has worked behind the scenes and up front, she loves that Muskoka Brewery fans are so passionate about craft beer.

Get to know Aurora

How did your journey start at Muskoka?

I applied at a job fair for a spot on the production line. They called to ask if I wanted to try it out, so I did. I started in the production line, and still work there, but I did work in retail for about about six months, which was nice. I worked both sides of the company, behind the scenes and up front, so that’s kind of unique to me. It definitely adds to my journey. The rest is history!

What’s the biggest difference between retail and production?

I really miss talking to the customers and doing tours. Because I started in the back, I felt like I had a strong understanding of the production and where things were. So touring was definitely one of my strong points. And then in production it’s so physical. I’m pretty tired after a shift. My body is done by 9-10 at night.

What makes Muskoka a great place to work?

It’s a great community! The people are all amazing and having a beer after work is always fun. We sometimes enjoy Hopped Up Hump Day on the patio or out front together. Because I’ve worked both sides, I know a few more people. I’m always stopping by and saying hi to people at their desk or the lunch room. I have relationships with people on all sides of the company.

What are you thirsty to learn more about in 2016?

How do you strive to venture off the beaten path?

I do like to travel! I do a lot of family vacations. I’ve been to Europe and I’ve been on a few cruises. My favourite place was London, England. There’s so much history and culture. It really takes you back. It’s a whole different culture and scene. I’m also outdoorsy and I really like to fish. My boyfriend and I go canoeing and kayaking a lot, but it’s been a while since I went camping.

How has your taste in beer changed since working at Muskoka?

Well, when I started working here I thought everything tasted like pine. My manager said it’s not pine, it’s the flavour from the hops. Since I’ve started drinking Muskoka beer my flavours and likes have definitely changed. I like to say that I’ve graduated to a light IPA.

What is your favourite Muskoka beer and why?

This is a tough one. I really like the Mosaic Moonlight Kettle. It’s a light single hopped Mosaic. I like that it has the hop flavour but it isn’t super strong or overpowering.

Do you have a favourite Muskoka moment?

Probably when we all went curling for one of our quarterly meetings. We got split into teams and interacted with people who don’t necessarily work right out of the brewery, like some of the sales reps. We don’t always get a ton of time to work with them, but at these meetings we spend more time together and get to know each other.

What’s happening in the beer industry right now that really excites you?

I think craft beer in grocery stores is a big win for us. Also, just seeing how much the company has expanded. Since I started just two years ago, they’ve added six new fermenting tanks. The growth in the company is huge and the craft beer industry in general.

What her Muskoka friends say about her…

Aurora’s unique, she’s not afraid to try new things as is the case with her hair colour. She tries many different shades, depending on what she feels like that week. It’s awesome. I wish I could do that. She’s also very outdoorsy and quite the fisherwoman. She loves fishing and is very good at it. She’s a very sweet person, very genuine with a lovely personality.

Aurora’s a natural leader. She takes charge, sees what needs to be done and pays attention to detail. She’s caring and considerate and always thinking of her co-workers. She loves travelling and going on cruises. And she can never seem to keep her nail polish on.