Rosé Cheeks comes to us in March of 2019 as the third release in this year’s Moonlight Kettle Series. This beer program is available on tap at the brewery, select partners and direct delivery through Beer Club.

What are the origins of the style of beer?

Jon: I believe it started in the West Coast as a response to the hazy IPAs of the East Coast. The brewers there went in the opposite direction with a very dry, clear and effervescent beer basically made to showcase the hops without being super sweet or hazy.

Mario:  As far as I know, San Francisco Social Kitchen and Brewery added this enzyme to make a super dry beer, which is the brut IPA. The style gained momentum from there. This amyloglucosidase enzyme breaks down all the sugars and starches into simple sugars that the yeast is able to ferment, so no residual sugar is left in the beer resulting in a super dry mouthfeel.

Sarah: Brut IPAs started trending over the past year and a half. They’re inspired by Champagne for being quite dry with a nice bubbly mouthfeel.

Mario: You’re able to make the beer a lot drier with refreshment from the reduced sugar. Just like a dry wine, beer drinkers can seek this style out as a lower sugar option. The challenge lies in balancing the bitterness with the much lighter body while still carrying through the hop flavour in the beer. Process-wise, we have to be sure we don’t cross-contaminate our other beers with the added enzyme so they remain the same. What we do is “denature” the enzyme. It’s not live so you basically need to twist it in the way that it doesn’t work anymore, which is by applying heat.

What made you want to try this style? How did you get to adding wine must?

Jon: Brut IPA is a pretty new and current style which is always fun to do. With there being very little residual sugar in a Brut IPA, I thought the wine flavour from the Cabernet Sauvignon must might stand out a little more. Without having to fight against a prominent hop flavour or sweetness of the malt that is apparent in other IPA styles, the wine flavour can come through.

Mario: My teammates were really excited about making the beer, and I enjoy the opportunity to teach.

Sarah: As a regular IPA drinker, I was excited to get into this newer style. Jon suggested the twist of Rosé, which I thought was quite timely as that style of wine, which I think was previously underrated, made a comeback last summer. #roséallday

Walk me through a tasting of the beer.

Jon: On the nose you’re going to get more of the hoppy aromatics: tropical notes with a little bit of the wine aroma. Looking at it, it has a nice kind gold and coppery tone with a good foam or head caused by the effervescence of the style. When you taste it, it’s a nice dry beer that gives you the hop character but not overpowering like other styles. You also get a prominent grape or wine characteristic as well, especially on the finish.

What inspired the name?

Sarah: I spend all day writing playful copy, the original list was lengthy. With our beer falling in March, it’s still a tidbit nippy out there, so Rosé Cheeks called out that element. As a marketing person, I think about the consumer level, where I want people at the bar to understand right away what’s going on in the beer. At the end of the day, we landed on this one because it was short, sweet, and cross-seasonal. For some, you don’t need the cold to get rosy cheeks with this 6.5% brew!

Jon: Hah. Well it started with using wine must which started us on the trail. And if you have a couple of these you might get rosey in the cheeks.

Mario: Basically, the colour/making you blush, so we were playing with those two characteristics of the beer. 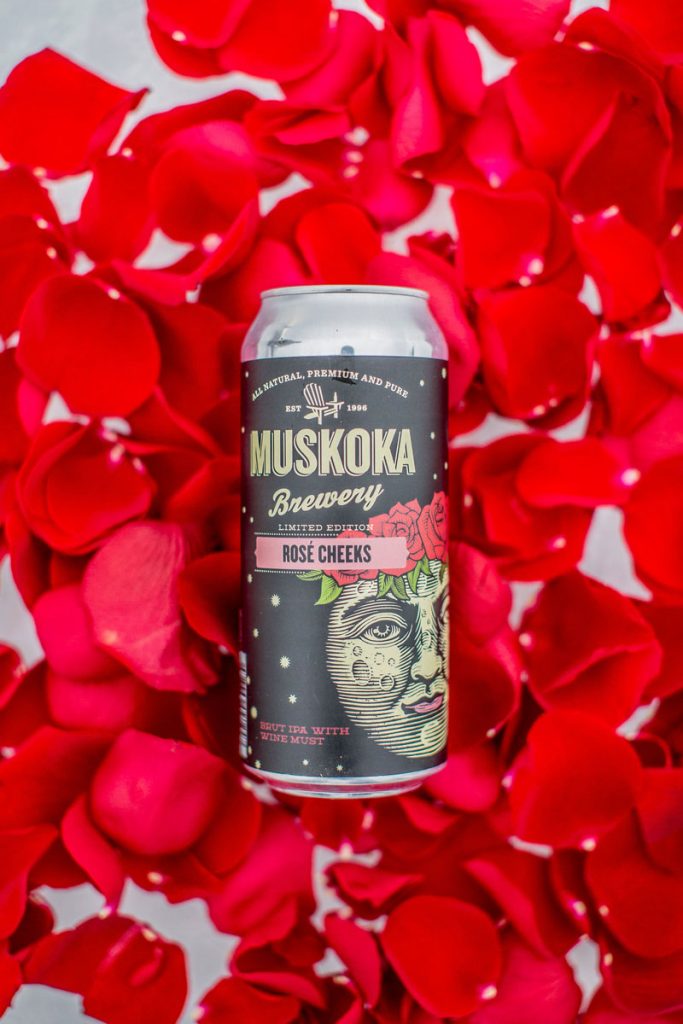 What inspired the artwork?

Sarah: We started with three solid ideas. One with the rose in the moon’s mouth (we felt that was too Valentines-y, following February); another with the rose crown. Once we saw the artwork by our in-house Graphic Designer, Jess Brommet, we felt the rose crown was more unique and connected to the beginning of spring… and hipster boho music festivals.

Where can people in your territory find Rosé

Bars and restaurants tap at their own discretion and our Moonlight Kettle kegs go fast! Always a good idea to call ahead if you’re going just for the beer of the month. Find the full list here. Next up, Honey I’m Bock.

Jon: It gives us the chance to work with other people from different departments which is fun, makes it more of a team effort. We get to be creative and learn about brewing and different beer styles.

Mario: Being able to create my own recipes, not just brewing standard brands, and getting involved with other people around the brewery that you don’t normally get to work with.

Sarah: Monitoring social media in my role, I get to see how customers interact with the brand identity, so coming up with the concept was really exciting to me. Hanging out with Mario and Jon was awesome. 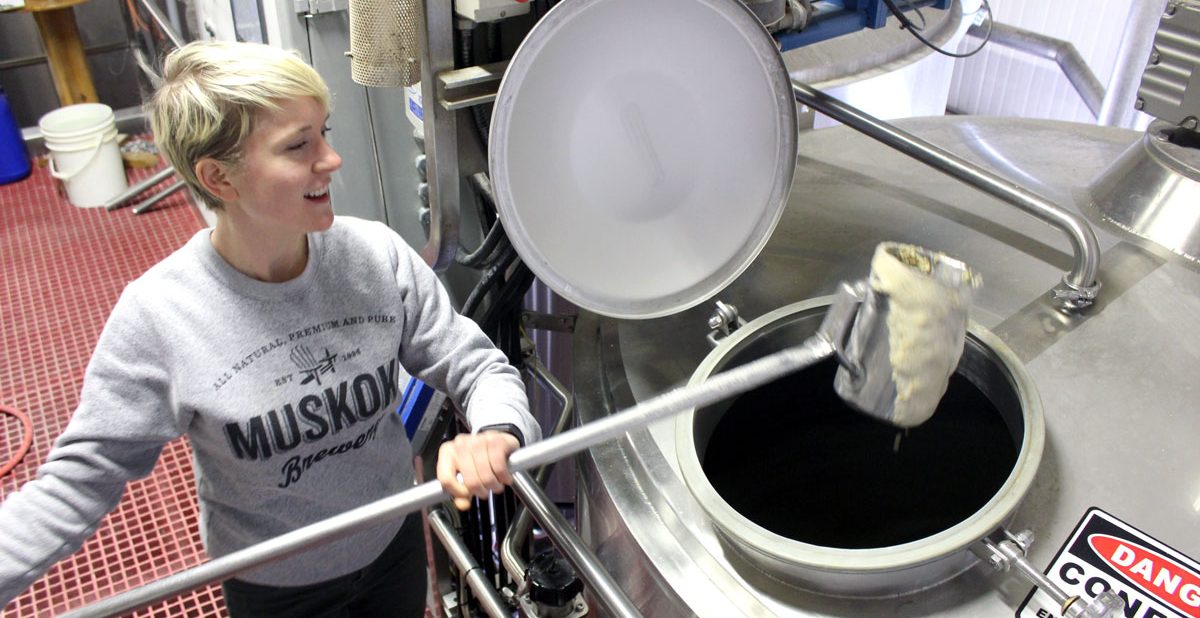 Have you ever seen a rosé beer before?

Jon:  I’ve noticed more rosé beers in the last year more than before. Surly Brewery out Minneapolis, J Wakefield Brewery out of Miami. I’ve never seen any other Brut IPAs with wine must in Ontario.

Sarah: It was a first for me!

What do you plan on pairing Rosé Cheeks with?

Jon: Soft cheeses like brie and oysters would be delicious.

Mario: I think because of the wine, maybe some sort of pasta with white sauce and four cheeses.

Sarah: Mario’s got me thinking Italian, which ultimately leads to pizza. Probably a stone-baked Margherita pizza from my favourite local shop in Gravenhurst.

Jon: Probably Upper Canada Dark before they were purchased by Sleeman.

Mario: Schneider Weisse Tap 6 Mein Aventinus– they’re pretty big out of Germany, so not sure if that’s craft by Ontario’s definition.

Sarah: Square Nail from Publican House in Peterborough. I used to work in a media company on Charlotte St and we got to take home some beer after a photography gig.

Mario: After I was a home brewer for eight years, I decided I wanted to do it professionally.

Sarah: After doing some media work for breweries, I cultivated an enduring taste for craft beer. Once that contract ended I sought out a job in the industry. I love seeing this local industry thrive.

What do you think people know you for in the beer industry?

Jon: I’m known in the industry just for being in it forever and travelling through the US to discover new craft beer styles and breweries.

Mario: I’m pretty technical. I like to see the science and the math upheld, not just the art. I like getting all the numbers right from the recipe formulation to the end product. I think people from school would call me a bit of a perfectionist.

Sarah: I think I’ve earned a reputation among beer bloggers and followers I interact with for having a genuine approach to customer service in my role. I try to be as personable as possible.

Do you have any other hobbies?

Mario: Sky-diving, bike riding, camping – all the things that make me feel alive.

Sarah: Motorcycling, newbie photography, and I sing and play bass with Bet Smith & The Currie Brothers out of Gravenhurst (shameless plug).