20 Feb Getting the Dirt On Beets

Posted at 18:58h in Uncategorized by Sarah Girdwood
0 Likes

My Heart Beets For You comes to us in February of 2019 as the second release in this year’s Moonlight Kettle Series. This beer program is available on tap at the brewery, select partners and direct delivery through Beer Club.

What are the origins of the APA style?

Shayn: The American Pale Ale is the American interpretation of the British Pale Ale or Bitter. It’s defined more by the American-grown hops which are drastically different from continental varieties which are more spicy and floral, whereas American hops are tropical and fruity. 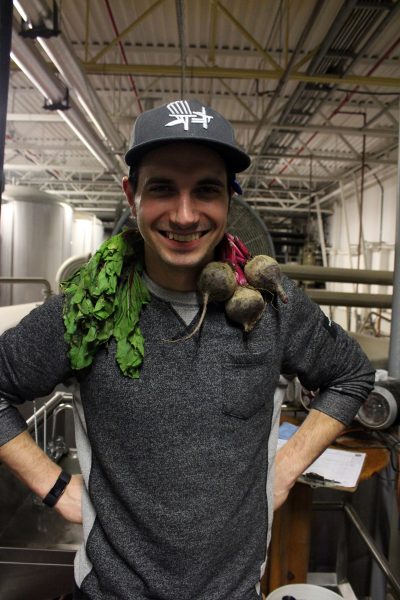 Shayn: It’s straightforward which is nice. APAs have a pretty wide spectrum of interpretation which allows you to put your own spin on it while staying true to style.

You always have to be careful when you’re adding fruit, so that you’re adding it at the end of fermentation to get the fruit character but not so far that you have leftover sugar that isn’t done fermenting when the beer gets canned. If it’s still fermenting in the can you risk it – well – exploding.

What made you want to try this style? How did you get to beets and pomegranates?

Josh: Well, both Kristin and I have birthdays in February and there’s also Valentine’s Day, so you know there’s a lot of love in the air…Unfortunately, Shayn’s isn’t. Anyhow… the idea stemmed from Shayn (Beer Guru), he had an interest in that particular style and it was one of three he first pitched to Kristin and I.  We knew the colour would resonate with Valentine’s Day and we were feeling something a little more sessionable in order for you to enjoy more than one. With fruit and veggies in the mix we knew the flavour profile would be really unique!

Kristin: We knew we didn’t want to make a stout as they’re popping up everywhere in the winter. We looked for fruits that were relatively seasonal to the winter and could contribute a tartness to the beer as well as nice floral notes to go with the hops.

Walk me through a tasting of the beer.

Josh: If you’re going through a typical tasting, you start with the look of the beer, then the aroma and finally over to the flavour profile and taste.  Quite frankly, it smells like a jolly rancher. It inspires the drinker to dive into a sip almost immediately. From the flavour profile you’re expecting a lot of sweetness and tartness, but that’s not the case. As soon as you take a sip, the flavour quickly dissipates, similar to a Detour in that it doesn’t hold back on flavour yet the bitterness does not linger. It’s an evolving experience from look, smell, and taste that leads you to take another sip.

Beets and pomegranates are known for having antioxidants, do those carry through the brewing process?

Shayn: Can’t say for sure. The compound that makes them so rich in colour are in the anti-oxidants. It’s not something we typically measure. Yeast and fermentation is a complicated process, and while the anti-oxidants definitely go into the beer, it’s hard to be sure what state they are in post-fermentation.

Kristin: I would like to think so. Our Prud’homme teacher (shout out to Roger Mittag!) taught us that hops have antioxidants and they carry through, so I would think the same would be applicable to the beets and pomegranates.

What inspired the name?

Kristin: We were trying to come up with some sort of pun for Valentine’s Day and having beets and pomegranate in the beer. We were just throwing a bunch around and thought the name was a great way to incorporate the beets.

Josh: We wanted to do a little play on words and to really call out the Valentine’s Day theme. With beer labels, you have a limited time to communicate what makes the beer special, so we aimed to incorporate beets in the name. We wanted to showcase what you can throw in beer. You really can do a lot more than most folks would imagine in brewing. 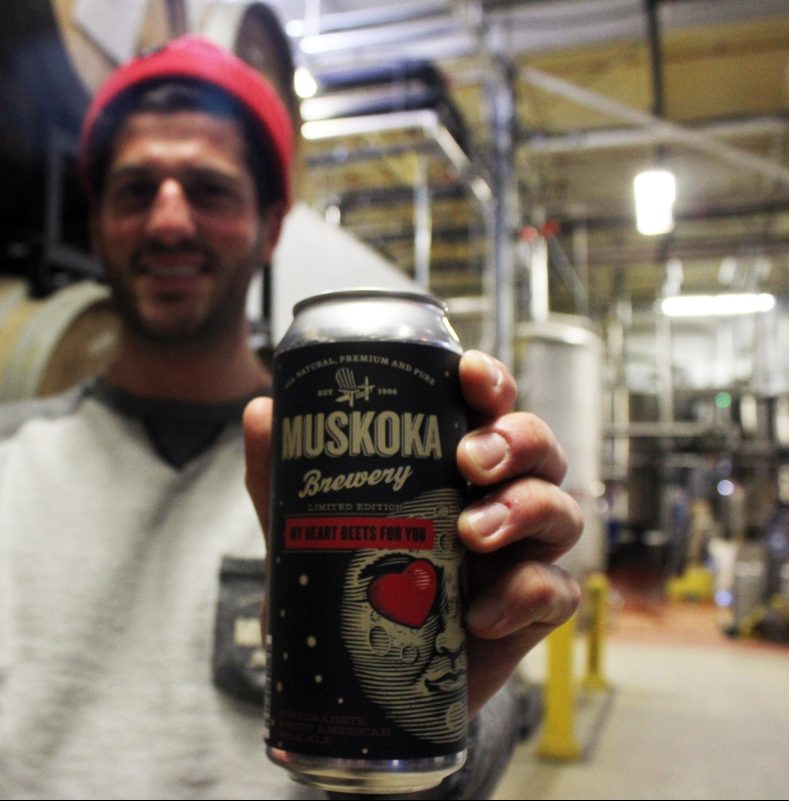 What inspired the artwork?

Shayn: Somebody said something about heart emojis and I think it took off from there.

Kristin: The heart eyes, right, so it’s supposed to be kind of like that emoji that you send people you like, except on the moon.

Josh: The emoji! It’s as simple as that. Our graphic designer, Jess Brommet, had a few examples and playing with the moon is always on brand and when we first saw this, we knew it was the right fit. I may use it more often than most when texting, emojis paint a good picture in texts. Also adds colour to the convo!

Where can people in your territory find the Beets?

Bars and restaurants tap at their own discretion and our Moonlight Kettle kegs go fast! Always a good idea to call ahead if you’re going just for the beer of the month. Find Moonlight Kettle taps near you.

Shayn: Right here at the brewery of course. Old Station has our series as well as the Griffin in Downtown Bracebridge.

Josh: As for exports, we might see it in Nova Scotia. There’s a very limited number so we have to pick and choose where we send it through export as openings for special submissions become available.

Shayn: I think it’s nice to work with people from other departments on creating something that the whole company has never seen before.

Kristin: I like that it’s a way to work with people from other departments. I really liked getting to know Shayn for the day, I’ve worked a lot with Josh in the past. It’s really nice to have that cross-functional relationship and learn about the beer in the process.

Josh: I really enjoy the creative process in developing the beer, and it’s a great way to get to know your co-workers.

Have you ever seen a beet and pomegranate beer before?

Shayn: I’ve seen them separately but never together.

Kristin: I haven’t, I’ve had a beer with beets in it before because Jen Reinhardt (our GTA West Sales Rep) homebrewed one. I’ve had one with pomegranate before, but never together.

Josh: I have not!

What do you plan on pairing My Heart Beets For You with?

Kristin: Gummy bears.. because I love gummy bears. I actually had the beer the other night with a triple cream brie cheese and it was really nice.

Josh: I would put it with some cinnamon hearts and a good partner.

Kristin: It was our Cream Ale, and it still holds a very special place in my heart.

Shayn: I was working in the restaurant industry, and I was in charge of purchasing for a craft beer bar. I started realizing the beer sales reps were having a lot more fun than other reps I came across.

Kristin: I partially wanted to live in Muskoka for the summer and work for a fun company. The people and beer are big a part of that at Muskoka. Didn’t know that much about beer, but now I’m brewing my second Moonlight Kettle! I worked as the events manager in the summer of 2010. It was just me driving around Ontario getting our delicious beer into the hands of the people. It was mostly beer festivals back when there weren’t so many. I fell in love with the world of beer and really missed it when I went back to school for Business and Finance at Western. I knew that’s what I wanted to go back to. I just got my Five Year paddle for full-time, but started with the brewery part-time in May 2010.

Josh: Honestly, Stephen Terhaar, our Muskoka Sales Manager. In May 2014, I came in for an interview for the northern Ontario sales rep position. At the time, I was living in Sudbury. Stephen interviewed me and we hit it off. He spoke to the company’s culture, the people and overall atmosphere which gave me peace of mind and that basically started my interest in craft beer and career after my undergrad. I have not looked back. I’m having a lot of fun and happy to be working for an awesome company. Crazy to think it’s already been nearly 5 years! Time flies.. 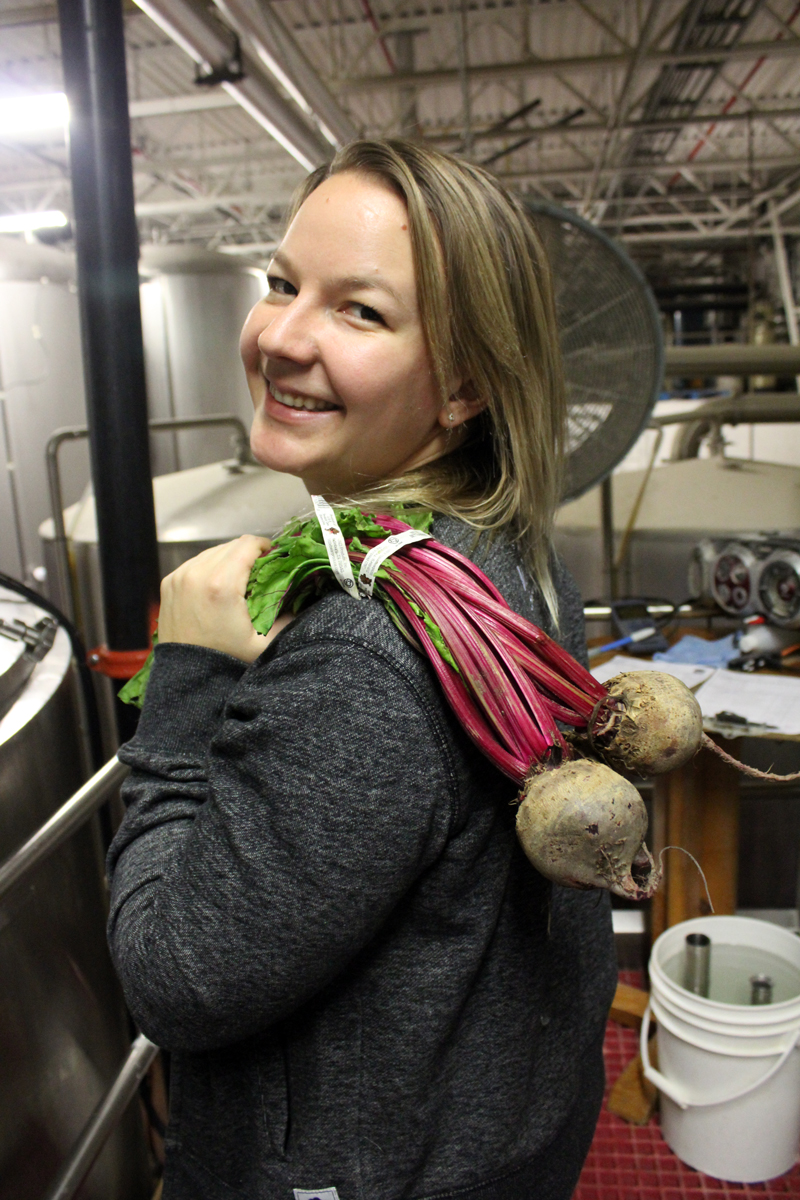 What do you think people know you for in the beer industry?

Kristin: People know me by my nickname “Half Pint” (I’m 5’2”). I’m a consistent face in the beer industry for the past ten years. I was on the OCB Week Team for a while, I go to the Beer Sisters bonspiel every year as a nice way to see everyone from the industry

Josh: I’d say, in Northern Ontario that’s where I feel known for craft beer. Aside from that, I participate and host at almost all the beer festivals outside of Ontario so folks would usually find me behind the booth opening samples and after hours, looking for the beer and cocktail bars with friends in the industry.

Shayn: I’m new to the brewing industry, but give it time.

Do you have any other hobbies?

Kristin: I go to Academy of Lions Crossfit Gym in Toronto, big fan of the community there. Besides that, you can find me wakeboarding and wakesurfing in the summer at my cottage.

Always good for a smile and a good time.

Josh: Love travelling and visiting cool coffee shops. That’s my top two. Aside from that, I love running and cycling. In the evenings or after hours, I really enjoy attending live music concerts. I’m a huge fan of the Arkells! If you haven’t caught them live, do it soon.

Shayn: Outside of brewing, I somehow still like cooking after doing it professionally for over ten years, plus I volunteer training guide dogs with my girlfriend (Brit, who also works as a brewer at Muskoka).